Home > General Advice > Dealing With Sexual Harassment in the Workplace

Dealing With Sexual Harassment in the Workplace 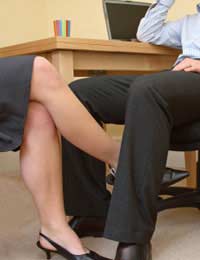 The Misery Caused by Sexual Harassment

Sexual harassment can take many forms but in general the definitions are:

There are certain steps that can be taken before reporting sexual harassment. The initial step would be to ask the individual who is using inappropriate behaviour to stop. Many people are not even aware that their behaviour is offensive to others and drawing the matter to their attention may be enough to stop it. Victims of harassment can feel uneasy in confronting the perpetrator directly. Quietly talking the matter over with other close work colleagues may be a way to ensure this is the right thing to do.

Making a Complaint over Sexual Harassment

If sexual harassment does not stop after it has been made clear that the behaviour is unwelcome then there may be no alternative but to inform a manager. By law, managers are required to keep their staff safe from this type of harassment. The complaint can be made verbally to the manager or in writing. A copy of the written complaint should always be kept by the victim. If the manager is the person using inappropriate behaviour then a higher member of staff should be informed.

In some cases the manager may not be able to resolve the harassment issue. If this is the case then it may be that a grievance procedure can be started by the victim. It is required under law that all companies have grievance procedures for this type of complaint. If a company has a union then they should also be able to help individuals with complaints and grievances. A grievance is never an easy thing to do and should be given serious consideration.

Proving Sexual Harassment in the Workplace

Proving sexual harassment can be a tricky business and this is one of the reasons why many victims will simply suffer in silence. Physical evidence such as texts, notes and emails from the perpetrator can also be used as evidence. Witnesses to the harassment will be a major help, and victims should also keep written notes when harassment does occur. An employee does not have to be the actual direct victim of sexual harassment to find the behaviour offensive and can still make a complaint.

Employers are taking a more aggressive stance to wipe out sexual harassment thanks to the laws on sexual harassment. But simply because laws exist does not mean that sexual harassment does not still occur in the workplace. This type of behaviour can seriously alter the victim’s life, and incidents should always be reported if they are unwelcome and persistent.

How to Cope With First Work Day Nerves

Interviews and Beating the Psychometric Test

When Things go Wrong in HR