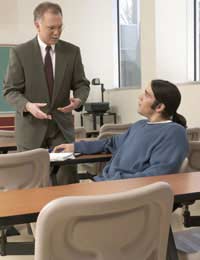 In the workplace, as indeed in life, there are a number of situations that have both an ‘in theory’ and an ‘in practice’ answer.

If you feel that your boss is treating you unfairly, this is one such situation. You will be able to find all sorts of employment law advice, but what we are looking to provide in this article is the real life solution.

It may sound wrong to suggest that the ‘official’ employment law advice is not applicable, because it is a good idea to understand your rights in the workplace. However, let us look at the ways in which you can either solve or minimise the problem before you go through official means.

If you work for a large company with strict human resources practices and a respect for operating under the exact rules of employment law, you may find that you are able to go through the official channels. However, if you work for a smaller organisation, while you may be legally entitled to make a complaint or ask for a review of the situation, in practice this may just make it difficult to stay in your job.

Larger organisations tend to have the resources to be able to respond to human resources issues in a more regulated manner. Not only this, but it is expected that you follow these regulations and so your complaint or concerns are given the treatment they require.

You will be expected to speak to your HR manager in an honest and open way, allowing you to explain how and why you feel as though your boss is treating you unfairly. Your HR manager will then deal with the situation, perhaps with a senior manager and it will be closely monitored.

If you do not feel your personal situation is problematic enough to involve your HR department but you require some changes to the behaviour of your boss and their treatment of you, you could arrange a less formal meeting. Be clear about why you feel your boss is treating you unfairly – it can be easy to look for someone else’s behaviour in a situation when perhaps we should modify our own.

Once you are able to define and illustrate, with clear examples, why you feel as you do, ask to have a chat with your boss. You may ask a trusted colleague to be present, although this makes the chat less informal and more of a meeting. Explain to your boss how you feel, say how it is affecting your work and your confidence. Detail what you would like to change, within reason, and ask for their views.

In a smaller operation there is unlikely to be the same infrastructure available, so complaints and criticisms rarely have a third party mediator, such as an HR manager.

In order to deal with your situation effectively and without making your difficulty with your boss more of a problem than it needs to be, you should be very clear about why you feel they are treating you unfairly. Think about your job and how well you have been performing before you say anything. It may be that you can see how you can modify your own behaviour before speaking to your boss.

If the problem is more serious than you feel able to cope with, it is important that you do bring the matter to your boss’s attention.